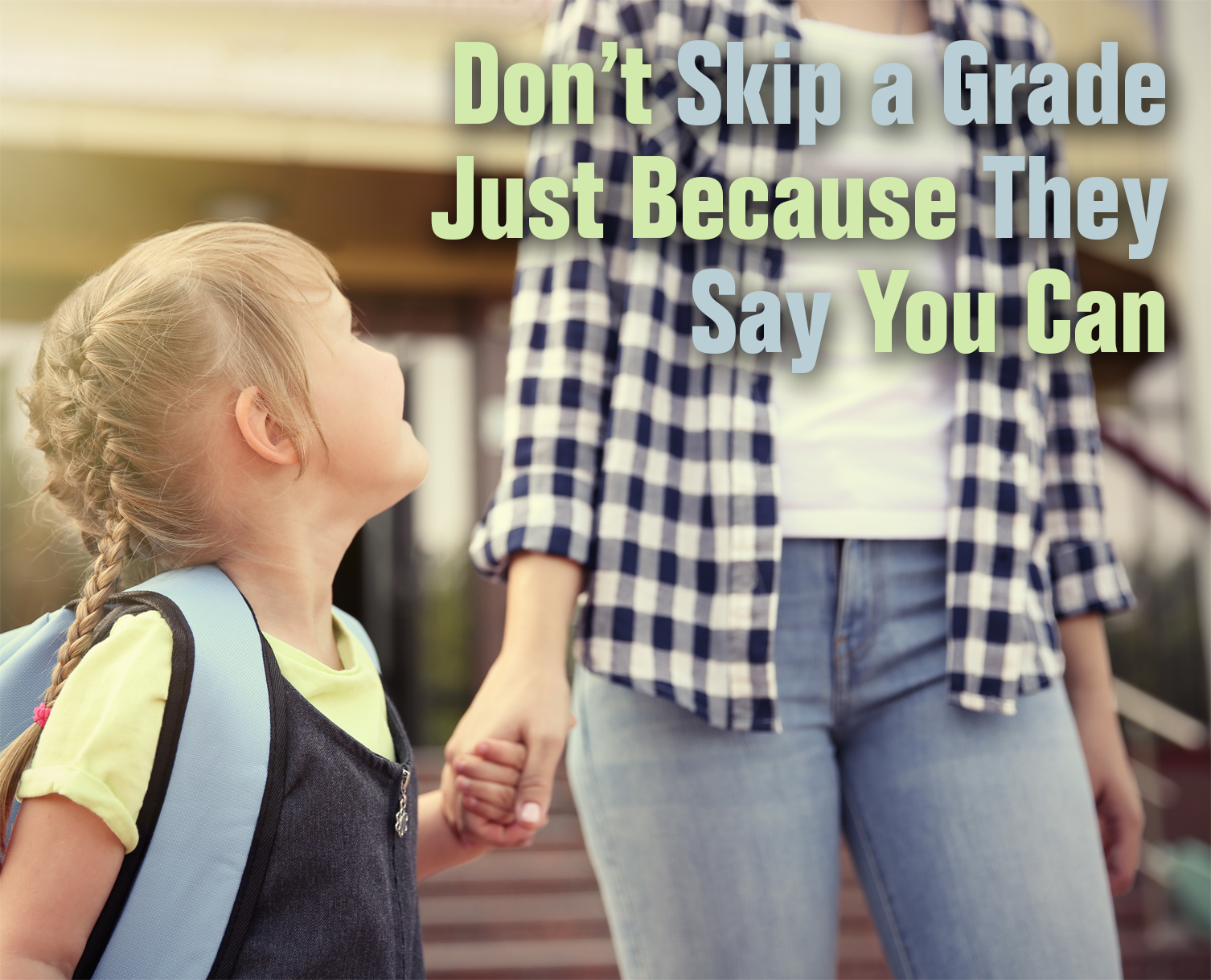 We all want the best for our children. We’re parents. It’s engrained in us; the moment we become a parent that switch is flipped and there’s nothing that will turn it back again. And if we’re told our child can skip a grade of course we want to. It means they’re are gifted, smarter than the rest of their classmates!

A Case Study in Ego and Flattery

A dear friend recently asked me for advice about her three-year-old grandson. Her adorable grandson is in an older 3’s preschool class. His birthday is in late September and he is big for his age. I mention this because it’s very pertinent to the case study. I was told that adorable grandson quickly finishes his work (whatever that can possibly be in a three-year-old class) and immediately and wants to play. He just wants to do what he wants to do when it wants to do it; he doesn’t bother other children he just wants to play.

Adorable grandson’s parents were called into the directors office and were told that he just seemed “bored” in the classroom and suggested that he be moved up to the four-year-old class where he would be more challenged. Of course the parents were flattered that their three-year-old was so smart the director wanted him to skip the grade and go directly to the 4’s. Grandson was then quickly moved to a four-year-old class. He has become more compliant; however, he asks when can he return to his 3-year-old class each and every day. This triggered a followup question for the parents “Should we keep him in the 4’s or let him go back to his original 3 year old class?”

Being the owner and director of a private preschool for many years I know exactly what’s going on here. The 3-year-old-teacher lacks classroom management skills. This has very little to do with how “bored” the child is and more to do with an overwhelmed teacher. Adorable grandson, despite his age and size, seems a little immature when it comes to following directions.

In this particular instance the grandson was told to skip a grade and was moved to the 4-year-old classroom because that teacher is stronger in dealing with classroom management. The director of this preschool knows what the strengths and weaknesses of their teachers are. As such the child was moved to a teacher that was more capable of handling him.

A child was moved from a teacher that couldn’t handle him to one that could. Some may say ok to that, but you need to look at the bigger picture here. This child was “skipped” ahead because of a weaker skill set in the teacher, not because he was “bored”. This child has been pushed into an environment that he is not ready for simply because a teacher couldn’t deal with him, and a director didn’t want to deal with the teacher. A child’s well-being and development took a back seat to the willingness of a teacher to be stronger and a director to deal with staff. And it works all to often to conceal the real issue with flattery and praise because parents are all too willing to hear it.

As the director of a preschool with over 300 students we had a founding principle to always put our students before ourselves. We made sure each and every child received the amount of individual attention they needed to keep their development on track. We would never have a student skip a grade or deal with a student’s issue by making it some other teacher’s problem because that’s putting the needs of the teacher ahead of the student. If we were doing that, we were doing something wrong.

Unfortunately not every preschool is like ours. That’s why when you make decisions about your child you need to remove your ego, especially if you’re contemplating having your child skip a grade.

One of the most difficult things a parent must do when making decision about their children is remove their own ego. But you have to. It’s an absolute must. You need to take a dispassionate view of your child. Remove all emotion. And I know that sounds a bit harsh because you love your child like no other. But it’s because of that love you have to step back and look at the big picture. In the same way doctors are taught to think clearly and critically, you need to make decision about your child.

In these sort of situations it’s easy to get swept up in the amazing feeling of your child being “gifted”, “better than” or “ahead of”.

Are you making the right decision for your child or because you feel good about it? It is incredibly flattering that the director feels that your child can academically handle a 4’s class, but is it the best move for your child to skip a grade in the long run? If the thought of “I can’t wait to tell everyone my child got to skip a grade” popped into your head—STOP. Stop now.

You’re putting yourself and your ego ahead of your child’s development. In these sort of situations it’s easy to get swept up in the amazing feeling of your child being “gifted”, “better than” or “ahead of”. And as you’ve read the school, faculty and staff may not always have you and your child at the top of their agenda. That’s why you need to ask questions.

Part 2 will be posted tomorrow which will cover all the questions to ask and things to observe if you’re thinking of having your child skip a grade.

« Pick the Perfect Preschool Backpack and Lunchbox
Don’t Just Skip A Grade Because They Say You Can: Part 2 »