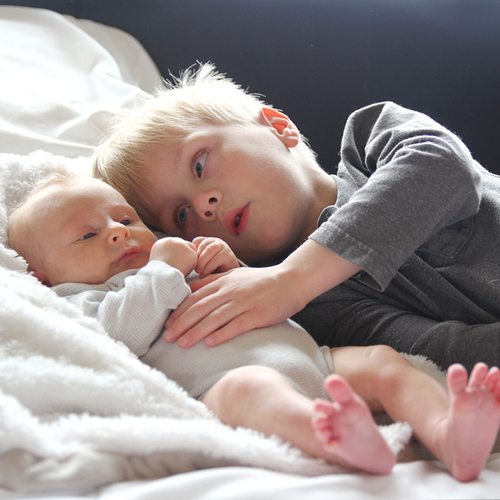 Just Google “kid finds out mom is pregnant” and follow the rabbit hole of kids finding out they’re going to be a big brother/sister. Here are some of my favorites. You’re welcome.

We were pretty lucky. When my son was five, we told him he was going to be a big brother and he was straight-up THRILLED. He had been praying for a baby sibling for years and God.. and my husband and I… and our financial planner (just kidding about the financial planner, but seriously, kids are PRICEY) finally answered his prayers.

His reaction video was pure sugar, as was the way he told our parents his big secret, and the video we took of him meeting his little sister for the first time.

From day one, my son was smitten. That’s kind of worn off a little, especially when little sis breaks his Lego masterpieces on accident/purpose.

But if the plethora of big sibling reaction videos are any indication, the response to a new baby coming is all over the spectrum of ecstatic to CODE RED DISASTER.

But that kind of describes siblinghood in general, doesn’t it? I know it does for my two kids. When they start fighting the second they see each other after school, I remind myself that once upon a time my son thought my daughter “made the whole world shine” (age 6; bath time declaration; circa mid-summer 2010).

And when they are genuinely kind and compassionate toward one another (usually because I’m yelling at the both of them to clean their rooms and nothing unites opposing forces like a common enemy), I try to capture those moments as the honest ones, the ones that stack up over time and hint at their true, lasting relationship when they outgrow the annoy-each-other-as-much-as-humanly-possible stage.
Regardless of how your previous-borns react to the newborn coming home, it’s always going to be more difficult than what you’re prepared for. Growing humans is a tough, messy, aching, peanut-butter-stained and cracker-crumbed job no matter how much you steel yourself for it, no matter how that initial reaction—from everyone—goes down.

Luckily, there’s also room for a whole lot of grace in this parenting gig. Plus? You never know which moment might garner you some YouTube fame.