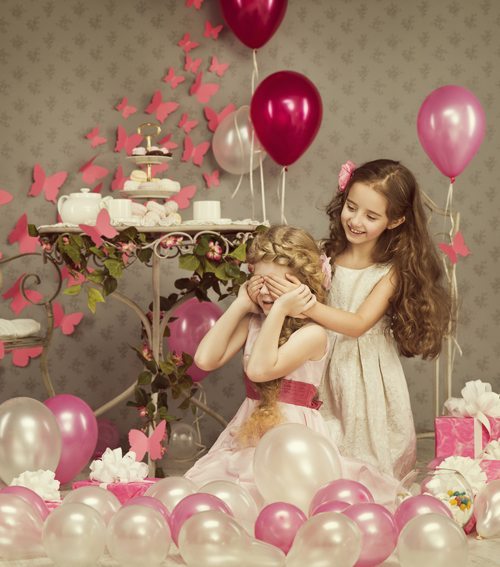 Can we be honest for a second? Kids’ birthday parties have gotten way out of control. Between the Pinterest-inspired décor and treats, the elaborate games and gift bags, the venue fees and sibling invites, where does the madness stop? Birthday parties used to be a store-bought cake (if you were lucky) and a few balloons, maybe a pin-the-tail-on-the-whatever thrown in for fun. When did keeping up with the Joneses become keeping up with the Joneses’ birthday party budget? We’re all for a little celebratory cake and ice cream around here, and celebrating major milestones in our tiny clones’ lives, but there are some people who have taken the birthday party crazy to the next level. We dare you NOT to compete.

One family thought their 6 year-old was enough like royalty to shell out $32,000 on her princess-themed birthday party. Spa treatments, a custom dress, flowers, centerpieces, costumes for the guests, and a bird-topped cake were not enough to please this princess, however. After emerging from a horse-drawn carriage, just like Cinderella, the little royal balked that the bird atop her cake was a displeasing purple, rather than the preferred blue. Guess there’s just no pleasing some people.

Show Up or Pay Up

And then there’s the poor 5 year-old who was invoiced for his share of a birthday party he couldn’t attend at the last minute. Little Alex was invited to the birthday party of a classmate, to be held at a local ski resort (what???). His dad confirmed his attendance a few days before, but when a last-minute grandparent visit conflicted, Alex chose to spend time with his family instead. Upon returning to school, an invoice for his portion of the party was put in his school bag by the birthday boy’s mother, who, I guess, felt put out about his no-show. Because she spent so much money at a ski resort for a 5 year-old’s birthday party.

Maybe you’re a little more reasonable when it comes to planning your child’s birthday party, and shelling out $175 for entertainment doesn’t sound that bad. What if that entertainment comes in the form of a baby alligator, brought to play in the pool with your little one and his friends? Still seem okay to you? Much like a circus, one New Jersey couple planned a three-ring event for their 1 year-old including an aerialist, a roller coaster, bowling, and a $40,000 price tag. The birthday boy? Slept though most of the party.

If you dream of hiding from the paparazzi behind a limo’s darkly tented windows, sipping on bubbly, with your favorite tunes blaring, then maybe you should use this company’s Kid’s Birthday Party Limousine Service to plan your kid’s next birthday. After all, there’s nothing like living your life through your kids and teaching them that money buys happiness.


Screw the Joneses. Let them rack up the credit card debt for rented ponies and princess parties. Here are birthday traditions your child will remember fondly: loving birthday wishes from family, getting to be the center of attention for the day, licking the batter from his homemade cake, and opening reasonably priced gifts from his guests. Taking a trip to the trampoline park or roller skating rink. Eating her favorite food for lunch. Parents spending the day focused on the birthday kid instead of coordinating the acrobats or exotic animals.

Emily Brown is a preschool teacher, freelance writer, and mom to two energetic, funny little girls with a flair for drama and a shared love of cheese and pickles. She’s also written a book on the history and food of restaurants in Birmingham, AL called Birmingham Food: A Magic City Menu.