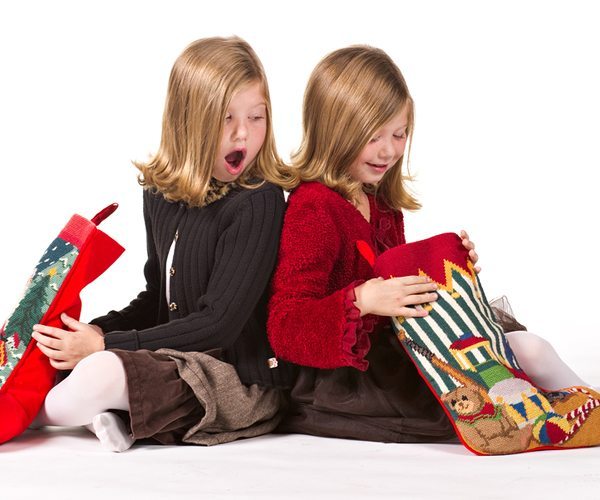 My little sister and I are less than two years apart. So when Christmas came around each year, we usually ended up getting the same gifts, just different versions. From clothes to toys to Hello Kitty pencil boxes (one of my FAVORITE gifts ever, by the way; well done, big brother), we were twinsies.

However, my older sister and older brother were much farther apart in age than us. Plus, they both have December birthdays. I know my parents tried to make their birthdays special (with giant cookie cake, no less!), but I can’t remember if they ever got the, “THAT gift is for Christmas AND your birthday!”

For the most part, and to my parents’ credit, they have always spread their generosity as evenly as possible.

Now that I’ve got two kids of my own who are six years apart, it’s a little more difficult to keep things even-stevens. My five-year-old daughter’s Christmas wish list consisted of anything found on an infomercial. You know, the kind of stuff you find in the drugstore with an “As Seen On TV” sticker and for under $10 each. (This year she asked Santa for a Peek-a-Boo. This child has a hundred different stuffed animals and ZERO cell phones.)

My middle-schooler, on the other hand, asked for an iPhone. (SPOILER ALERT: He is not getting an iPhone.) It seems the older these kids get, the more expensive their taste. One iPhone = a helluva lot of trinkets. (REITERATE: He is NOT getting an iPhone.) But the kind of gifts that would interest an eleven-year-old take up much more space on the bank statement than what a five-year-old is asking Santa for. I KNOW, I KNOW, Christmas isn’t about who has the most gifts under the tree. But to kids? It kind of really is. No matter how much we teach them gratitude and generosity, I know there will be a little twinge in the gut if they realize someone’s coming up short.

FACE IT. It’s a fact of life. He with the most toys wins. And it can get a little out of hand.

That’s why I love the idea behind meaningful limits to the gift-giving.

One idea is to give three gifts, symbolic of the three gifts Jesus received from the wise men. Granted, not too many kids I know would get excited over gold; frankincense is better saved for when those kids are college-age and moody; and no one knows what the heck to do with myrrh. But the symbolism is there, and it serves as a helpful reminder for believers in Jesus that he’s the reason for the season.

Another good, strong limit on gifts is: Want, Need, Wear, Read. Pretty self-explanatory − four gifts per child, each fitting neatly in the categories. It’s straight-forward, it keeps clutter to a minimum, and it rhymes. What more could you want?

There are so many different ways to keep the gift-giving just below frenzy level and to instill meaning behind the whole season. What are some of your favorite ways to keep Christmas more centered on the giving, instead of the gifts?

« Full-Blown Toy Emergency: Christmas Toys for Every Age
“Thanks for the Gift — I Hate It!” »